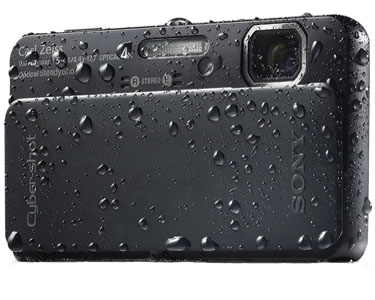 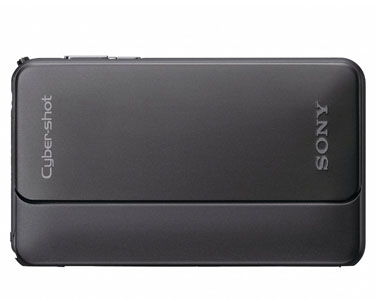 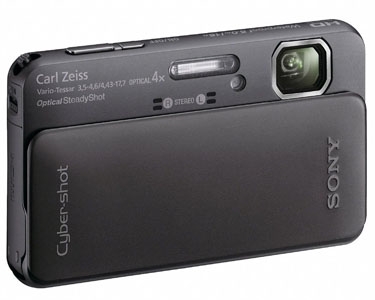 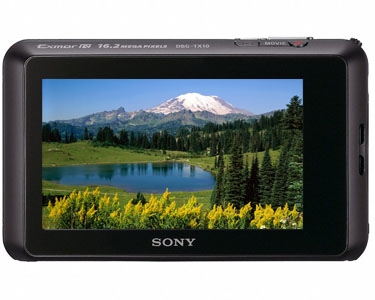 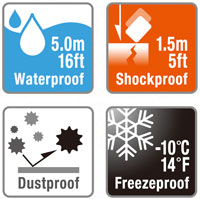 Rugged and Stylish
This camera is just as much at home in the water as on a night on the town! The sleek and stylish TX10 fits the slimmest pocket or purse, yet is waterproof to a depth of 16 ft, shockproof from falls up to approximately 5 ft and dustproof thanks to its airtight construction. As well, this durable camera can even withstand extreme weather conditions, as it is operable in temperatures from 14- to 104-degrees Fahrenheit.  Seamlessly shifting from underwater marvels to a night on the town, the TX10 always makes it easy to get the best shot!

Full HD 1080@60i
Record crystal clear movies at the highest resolution available with capabilities for 60i in 1080 Full HD. This provides stunning, fast motion video with less distortion for playback on your HD TV.

iSweep Panorama
With iSweep Panorama just press the shutter, pan the landscape and let the camera do the rest. It automatically links together each frame to produce a panoramic image. This model even detects faces and moving subjects to stitch intelligently different widths to help avoid subject distortion.

Background Defocus
DSLR photographs are often beautiful because they blur the background, putting the emphasis on the subject. Now our point-and-shoot cameras can deliver this signature DSLR benefit. The system takes two shots, identifies the background and applies a defocused background keeping the subject crisp and clear.

Soft Skin Mode
Portrait subjects will love the results. Soft Skin mode recognizes skin tones and reduces the appearance of blemishes and wrinkles without affecting the rest of the shot.

High speed shooting
The DSC-TX10 can capture full 16.2 megapixel resolution images at up to 10 frames per second, helping to ensure that the decisive moment is captured such as the soccer ball flying into the goal. In addition, the DSC-TX10 employs a mechanical shutter that helps reduce distortion when continuously shooting moving subjects.

Smile Shutter technology
Smile Shutter technology captures a smile the moment it happens. Simply press the Smile Shutter button and the camera does the rest. Also select adult and child priority and indicate the degree of Smile Detection Sensitivity. Intelligent Scene Recognition can be used together with Smile Shutter mode.  This means that beautiful smiles can be captured with settings optimized for the particular scene, even in difficult conditions such as twilight and backlighting.

Anti-blink Function
It’s frustrating to capture the perfect shot, only to review it later and discover subjects blinked during the photo. When the camera is set to Soft Snap, the Anti-blink function captures two images, recording only the photo with less squinting or blinking. If a blink is detected in other shooting modes, a warning will be displayed after you take the shot.

Anti-Motion Blur Mode
Capture cleaner and sharper images in low light for non landscape shots. When set in Anti-motion Blur Mode, the DSC-TX10 captures six images in a fraction of a second with higher shutter speed and combines the data from all six to create a single image of extraordinary detail and dramatically reduce subject blur, beyond the capability of traditional cameras.

Backlight Correction HDR
Shooting high-contrast scenes can often lead to washed out backgrounds and/or details lost in shadow. Backlight Correction HDR helps correct for this by taking three pictures at different exposure settings and processing the best elements of all three into a single image for more natural looking shots.

Compatible with PC and MAC Systems
The Full HD video captured with the DSC-TX10 can be used with the provided Picture Motion Browser software1 for PC and iMovie (sold separately) for Mac systems.

Includes Sony PMB Portable software
With the pre-installed Picture Motion Browser (PMB) Portable 5.5 software the DSC-TX10 makes it easy to pre-select videos and images in the camera and conveniently upload them from the camera to a compatible PC and popular Internet sharing sites without the need for any additional software or install.