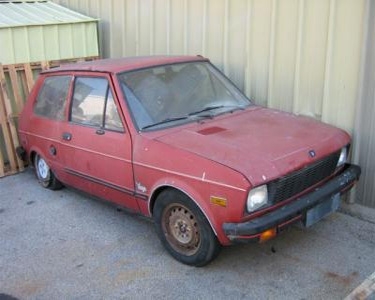 Here at QuiBids, we’re always trying to offer the right products that you would want to see up for auction. With the continued growth of our company, our search for the quality products to auction is a never-ending journey.  However, we’ve decided to put that online retailing journey on a temporary pause and venture into the crappy used car market.

Instead of putting a quality product up for auction, why don’t we put the worst car in America up for auction? Only on QuiBids can you have this much fun while shopping for a Yugo. But we’re not putting just any old Yugo up for auction. We will auction off an exact replica of Giuseppe’s Old Yugo. Who’s Giuseppe? We’ll explain:
What do you call a Yugo with a flat tire? Totaled.
Our search for the next illustrious super-product on QuiBids brought us to our Facebook page. What better way to find ideas for the next great product than to put up for auction what customers suggest? After skimming through old QuiBids Facebook posts, a product was mentioned that piqued our interest, and it came from a post by a regular QuiBidder named Giuseppe (but those who frequent our Facebook page may know him better as “G”). G is a loyal and outspoken user of QuiBids (with a remarkable sense of humor, we might add). He’s made a name for himself on our Facebook page by actively engaging with other bidders and otherwise being a valuable contributor to our community.
What’s included in every Yugo owner’s manual? A bus schedule.
Way back in December, Giuseppe began telling people all about a Yugo, a subcompact automobile, that he had won on QuiBids (we honestly don’t recall auctioning off a Yugo, but we’d never call G a liar, so we’re going with it.) Here are just a few gems of knowledge that Giuseppe’s dropped on our wall in the past couple of months.

Giuseppe, you are so very welcome for the ‘car.’

This is evidence that the Yugo can help you make friends. Way to go, G!

The Yugo broke down? Twice? That’s so classic. 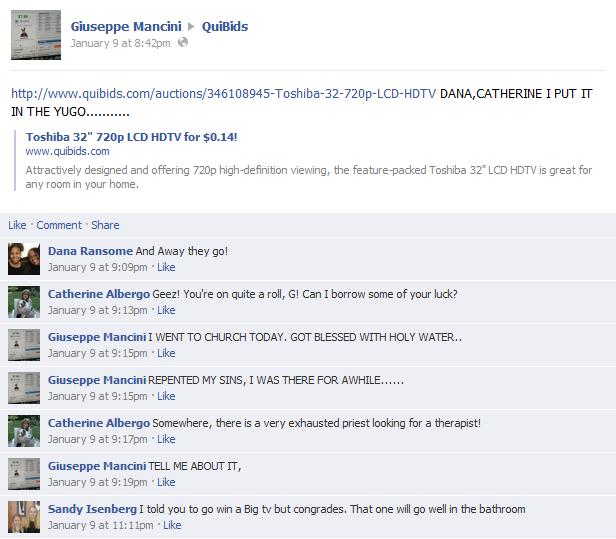 G celebrated his awesome HDTV QuiBids Win by taking his TV out for a spin in the Yugo. What a lucky TV… 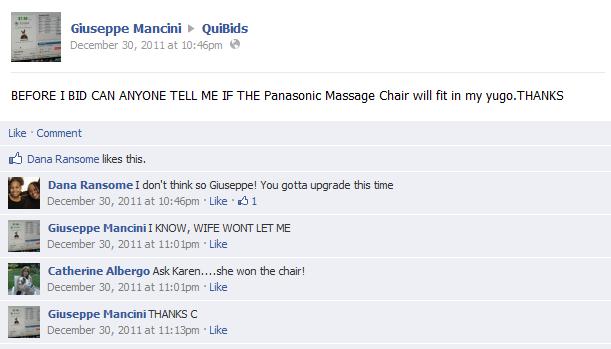 Sadly the massage chair will not fit in your Yugo, G. But we like where your mind’s at!
A quick Google search will tell you that a Yugo may not create the same enthusiasm that Giuseppe had for it. It’s even been debated that the Yugo is the worst car in America. We’d like to think of the Yugo as a jack-in-the-box, because you never know when the steering wheel could just pop right out. So instead of naming it “The Worst Car in America,” we’ll call it “The Most Terror-Inducing Car in America.” The unpredictable nature of the Yugo could turn even the most simple of lives into a suspenseful action movie. Not convinced? Check out the experience of Yugo-terror from none other than the vice president of Yugo America, Tony Ciminera.
What do you call a Yugo that breaks down after 100 miles? An overachiever.
The first time Tony Ciminera, vice president of Yugo America, actually drove a Yugo, it almost killed him. The steering went out and he stopped just short of plowing into a tree. During another test drive, the seat broke as he was approaching a train crossing, and he suddenly found himself lying on his back, steering with his knees.
“The Yugo has been called a hopelessly degenerate hunk of trash and a vile little car. Critics have said it’s hard to view on a full stomach.” – Time Magazine
“How do you get a Yugo to go from zero to 60 in under 15 seconds? Push it off a cliff!” – New York Post
“hard to recommend at any price… you’d be better off buying a good used car than a new Yugo” – Consumer Reports

*This auction is presented for novelty purposes only.  The item shown is part of an April Fool’s Day promotion and cannot be fulfilled.  No bids will be deducted from your account should you choose to bid on this auction.  The winner of this auction will receive a free game play.