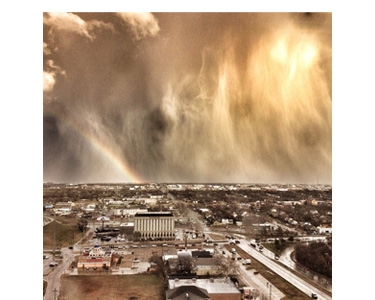 If you’ve ever been to the great state of Oklahoma, you know that it has some of the most crazy and intense storms in the world. For basketball fans, the state of Oklahoma is known for the OKC Thunder, one of the NBA’s hottest teams right now.  But those who aren’t basketball fans, however, might associate Oklahoma with a different kind of Thunder – the kind you’d see in the sky.  As you probably are already aware, QuiBids‘ offices are headquartered in Oklahoma. Just last month, I (Blake Brown) had captured a photograph of an Oklahoma storm from my office window.  The photo showed the back end of a fierce storm with a beautiful rainbow trailing behind it as if it were attached like a tail.  Within a matter of minutes the photo was shared thousands of times, and quickly became viral.  The story behind capturing the photograph can be found here.

Recently, QuiBids enlisted the help of long-time meteorologist and local celebrity, Gary England.  Gary spent many weeks with QuiBids executives vigorously rehearsing his top secret rain dance routine.  He even shared some of his best-kept weather summoning secrets.  After many sleepless nights of exec dance rehearsals with rain dance instructor, Gary England, we’re proud to say that we’ve finally mastered the ability to create and customize storms for commercial purposes.
So how do you get one of these Oklahoma storms for yourself?
Today and today only, QuiBids will be auctioning off an Oklahoma Storm Bundle complete with rain, hail, thunder, lightning and more!  Don’t be fooled by your local ‘fluff’ storms;  Oklahoma Storms mean business.  After doing extensive research (polling my office mates, Matt and Jill), I have created the chart below to help you better understand the differences of intensity between Oklahoma storms and storms located elsewhere.  As you can see, Oklahoma Storms aren’t something to take lightly.

*This auction is presented for novelty purposes only.  The item shown is part of an April Fool’s Day promotion and cannot be fulfilled.  No bids will be deducted from your account should you choose to bid on this auction.

*This auction is presented for novelty purposes only.  The item shown is part of an April Fool’s Day promotion and cannot be fulfilled.  No bids will be deducted from your account should you choose to bid on this auction.  The winner of this auction will receive a free game play.