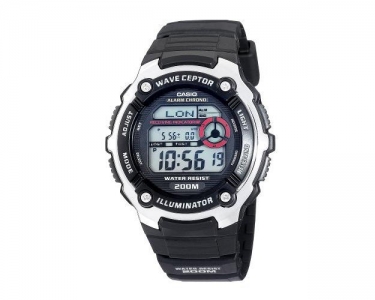 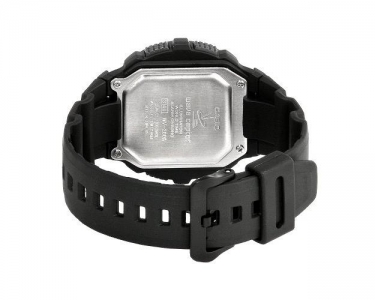 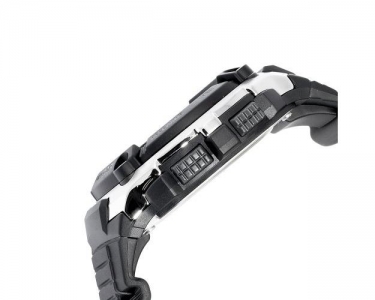 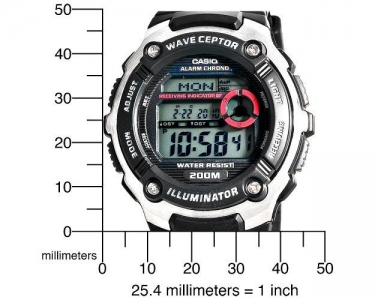 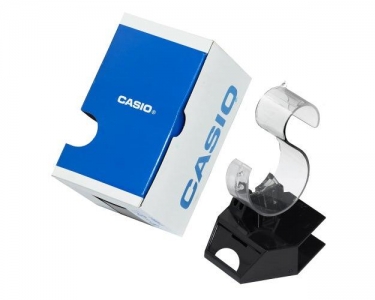 Boasting the precision and reliability of multi-band atomic timekeeping, the Sport Watch #WV200A-1AV is part of Casio's rugged and stylish Waveceptor collection. This self-adjusting timepiece features a large LCD readout that has the capability to display the day of the week in nine different languages. Stopwatch and alarm timer functionality also help keep you on-track. Water resistant to 200 meters (660 feet), this Casio original even offers 48-city world time and 12 or 24 hour formats, so you can always be ready to travel the globe.

With the launch of its first watch in November 1974, Casio entered the wristwatch market at a time when the watch industry had just discovered digital technology. As a company with cutting-edge electronic technology developed for pocket calculators, Casio entered this field confident that it could develop timepieces that would lead the market.

In developing its own wristwatches Casio began with the basic question, ""What is a wristwatch?"" Rather than simply making a digital version of the conventional mechanical watch, we thought that the ideal wristwatch should be something that shows all facets of time in a consistent way. Based on this, Casio was able to create a watch that displayed the precise time including the second, minute, hour, day, and month — not to mention a.m. or p.m., and the day of the week. It was the first watch in the world with a digital automatic calendar function that eliminated the need to reset the calendar due the variation in month length. Rather than using a conventional watch face and hands, a digital liquid crystal display was adopted to better show all the information. This culminated in the 1974 launch of the CASIOTRON, the world’s first digital watch with automatic calendar. The CASIOTRON won acclaim as a groundbreaking product that represented a complete departure from the conventional wristwatch.
Casio transformed the concept of the watch — from a mere timepiece to an information device for the wrist — and undertook product planning based on this innovative idea. We developed not only time functions such as global time zone watches, but also other radical new functions using Casio’s own digital technology, including calculator and dictionary functions, as well as a phonebook feature based on memory technology, and even a thermometer function using a built-in sensor. The memory-function watches became our DATA BANK product series, while the sensor watches developed into two unique Casio product lines of today: the Pathfinder series displaying altitude, atmospheric pressure, and compass readings.
In 1983, Casio launched the shock-resistant G-SHOCK watch. This product shattered the notion that a watch is a fragile piece of jewelry that needs to be handled with care, and was the result of Casio engineers taking on the challenge of creating the world’s toughest watch. Using a triple-protection design for the parts, module, and case, the G-SHOCK offered a radical new type of watch that was unaffected by strong impacts or shaking. Its practicality was immediately recognized, and its unique look, which embodied its functionality, became wildly popular, resulting in explosive sales in the early 1990s. The G-SHOCK soon adopted various new sensors, solar-powered radio-controlled technology (described below), and new materials for even better durability. By always employing the latest technology, and continuing to transcend conventional thinking about the watch, the G-SHOCK brand has become Casio’s flagship timepiece product.
Today, Casio is focusing its efforts on solar-powered radio-controlled watches: the built-in solar battery eliminates the nuisance of replacing batteries, and the radio-controlled function means users never have to reset the time. In particular, the radio-controlled function represents a revolution in time-keeping technology similar to the impact created when mechanical watches gave way to quartz technology. Through the further development of high radio-wave sensitivity, miniaturization, and improved energy efficiency, Casio continues to produce a whole range of radio-controlled models.